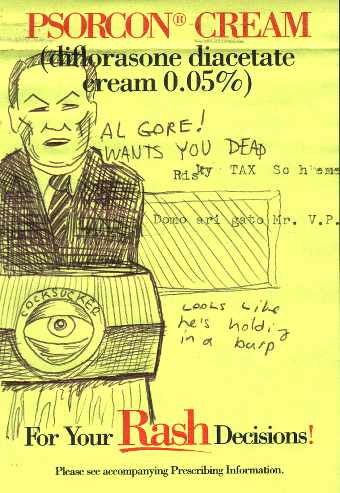 Well, I just finished watching the first debate of the 2000 election. Here is a doodle I made of Al Gore during the broadcast. All the pundits talk about how great a debater Al is, but I just can’t get past his overplayed emotions and his I’m-talking-to-a-6-year-old delivery. Hey, and has anybody seen his eyebrows!?! My ol’ uncle Mervis P. Napkin once told me, “Never trust a man who ain’t got no eyebrows… they gets all that sweat in their eyes and that ain’t right.” There’s definitely something above his eyes, a weird lump of skin or something. Perhaps some silly putty clumps?

They do a lot of Democrat/Al Gore design pieces in the design studio where I work. They make a point out of covering up or cropping his wispy bald spot in the photos they use. I wish they would just airbrush in some Dekaukus/apeman eyebrows. It just ain’t right. Or as Mr. Gore like to say in his best, condescending tone, “That would be unconscionable, and that means… BAAADD!!