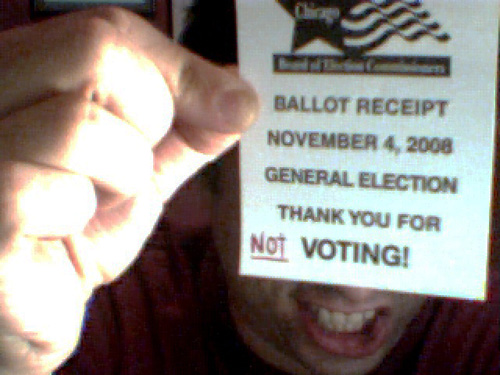 If you are not a democrat, voting in Chicago can be very disheartening. Usually the ballot consists of the federal races, about 200+ judicial retention choices, and a few dozen uncontested Democrats in local “races.” This year it’s even worse. Polls show that hometown candidate Obama has an insurmountable lead in the state, and any other vote is more-or-less statistically irrelevant.

This is all somewhat besides the point. ActualIy, can’t really stand by any of the other names on the ballot either.

Though I like his personality (McCain seems at least to have a genuine sense of humor unlike Obama’s detached, scripted-feeling delivery) and liked way he’s campaigned for the most part (the McCain Internet ads were aesthetically superior, funny and much more to the point in my opinion), McCain never emerged as anything other than a big-government republican. Sure he highlighted his anti-pork positions, but when the other shoe dropped during the height of the financial crisis, he sided with the majority of pro-bailout welfare statists. Obama just remained the legislative non-entity he has been for the past four years.

Normally in a situation like this, I would turn to the Libertarian Party, but Bob Barr is an opportunist tool—where’s Harry Browne when we need him… dead, as a matter of fact. The rest of the choices were even nuttier than the Libertarians. I’m tired of voting for the lesser of two evils. I had made up my mind a while ago that maybe this is a good year to stay on the sidelines.

Last night, however, I had a better idea. In some ways it was inspired by Penn Jillette’s no-ink temporary tattoo. Penn, rather than wimp out with a paint-on temporary tattoo, got a real tattoo. However, the artist did not use any ink. He went through all the hours of pain in getting a tattoo—which, really, is the macho cool part of tattoos—without the embarrassing permanent stain that he’d have to live with for the rest of his life.

Here’s was my idea: I went to my polling place, waited my turn, signed in, was shown how to use the ballot, went to the booth, and turned in an empty ballot. This way I went through the whole painful process, and yet could say, “none of the above” without being accused of being an apathetic slacker (which, nonetheless, I am. But that’s besides the point). This is about as close to being a performance artist that I am going to get, folks.

Before making my ultimate decision, I stood in the booth, I staring at the ballot and beginning to have second thoughts. The lure of voting just for that satisfaction of “pulling the lever” is very great. In the end, I’m glad I took that deep breath and stuck with my plan. Walking away from the polling place, I felt a sense of relief. I didn’t accomplish anything other than increase the molarity of the vote pool, but at least I didn’t waste my vote. In the words of the aforementioned Penn Jillette, “The only way to waste your vote, is to vote.”

Now, I’ve lied a little bit. I did actually vote in the three voter referendums that were on the ballot. Also, I voted to retain the judge that happened to be presiding when I got myself out of a ticket a few years ago. But, these were votes I could make that were not some sort of compromise or a lesser-of-two-evils choice.

Thank goodness all this crap will be over soon and maybe in 2012 a more individualist, liberty-minded candidate will emerge, but, until then, I am not holding my breath.