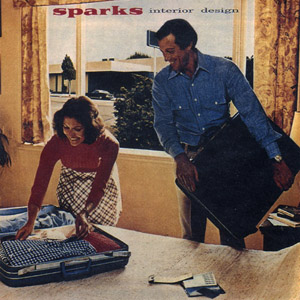 My least favorite Sparks album (Pulling Rabbits Out of a Hat is a close second). Pre-2000s Sparks have tended to follow the audio trends of the day. A Sparks record from 1988 sounds like just about every pop record from 1988, and let’s face it, pop music in the late 80’s was pretty awful. Interior Design is at times indistinguishable from a Paula Abdul record. There’s lots of digital synth sounds, trash can electric drums, and basslines that use that electric bass guitar patch straight off the Seinfeld soundtrack. The only song that I actually like is “The Toughest Girl In Town.” I guess there might be some decent song writing buried in here, but I just can’t get past the arrangements. Maybe it’s just giving me flashbacks of my senior year of high school. Shudder.