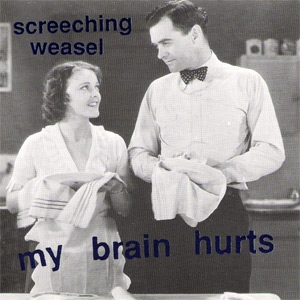 This is one of the CDs that my wife owned before we got married. I think she bought it on the advice of my roommate who, along with me, my brother and a few other friends, went and saw Screeching Weasel play at Treno’s in Urbana. I thought they were okay, my roommate obviously liked them more than me. I just remember we watched the show from the side of the stage—where the opening band had broken down their drum kit. While Screeching Weasel played my brother was stepping on a kick drum in time with the music. Ah, the stupid things you remember. Anyhow, this CD isn’t that bad. There’s a string of tracks from “Guest List” to “The Science of Myth” that are all excellent poppy punk numbers. However, this type of punk, the kind of stuff that defined Lookout Records in the 90s, is really not to my tastes. After about twenty minutes of “Whoa-oh-ah-oh” it gets a tad boring. Also, some of the acts that grew out of this scene are like the equivalent of boy bands for disenfranchised shopping mall punks and so the style just leaves a bad taste in my mouth. But I do really like Ben Weasel’s writing and lyrics, so, if I am going to have a pop-punk album in my collection, it might as well be this.