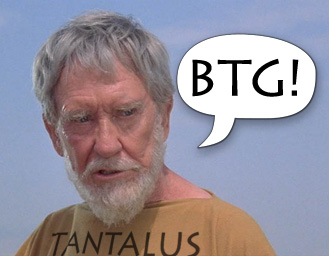 It’s the latest craze sweeping the nation, and you heard it here first! It’s the meme to end all memes. It’s the acronymiest acronym around!

What is it? It’s BTG! I intended it as a replacement for hackneyed OMG, BTG is my chat shorthand for “By the Gods!” A statement of amazement. A proclomation that you have been witness to the divine, usually in the context of having your ass handed to you by a 12-year-old in Counterstrike.

It’s origin is from the great Harryhausen film, Clash of the Titans. In the film, Burgess Meredith plays Ammon, a Greek playwright and sidekick to Perseus… he is the ancient Greek version of C3-PO (and Bu-Bo is poor man’s R2-D2). Throughout the film, Ammon utters, “By the Gods!” in amazement at the miracles Zues and company lay down on Perseus. Click Burgess to hear more examples.

Here at MoonRock labs we have also been researching other memes to. Here’s a sneak peak: ROTCL, YG and HHJ.

So there you have it. A new thing to SMS to your peeps, BTG!